Where Do Dolphins Live? Maybe We Can Understand Them Better

Where Do Dolphins Live? Maybe We Can Understand Them Better

The Habitat of dolphins is one of great interest to many Marine Biologists and other scientists around the world. For in order to understand the sheer complexity of the dolphin you must observe it in its most natural form, see what it does, see what it eats, see how it responds to variables and other anomalies within its proximity. Hence the location of where do dolphin live is valued, and thankfully there is a great surplus of information in this area. Hopefully you will find this information interesting too!

Dolphins in the Ocean

Dolphins are found quite literally all over the world; generally they reside in shallow seawater of the continental shelves. You can observe dolphins in both cold and warm waters.. Of course, there are certain species of dolphins that show preference to a particular temperature. The bottlenose dolphin prefers to live in warmer waters.

Specifically one of the best-known species, the bottlenose dolphin lives in every ocean of the world except the Arctic and the Antarctic oceans. The Atlantic spotted dolphin, lives all over the tropical and temperate areas of the Atlantic Ocean avoiding the Artic and Antartic regions also.

Dolphins in the River

Dolphins can at times be found in rivers as well. River dolphins are four living species of dolphin, which reside in freshwater rivers and estuaries. They are classed in the Platanistoidea super family of cetaceans. Three species live in fresh water rivers. The fourth species, the La Plata Dolphin, lives in salt-water estuaries and near-shore marine environments. However, it is scientifically classed in the river dolphin family rather than the oceanic dolphin family. These species may never venture towards the oceans. Scientists speculate this due to either a strong attachment to the niche, or initial habitat, or simply because they know that life within the seas are slightly more perilous than those in the river. 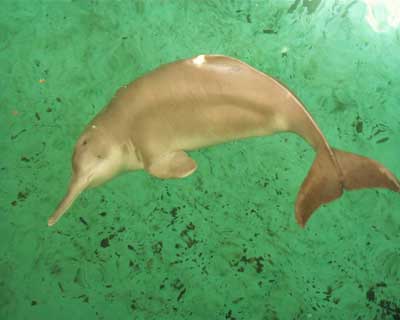 River dolphins are now actually facing extinction due to habitat loss, hunting by humans, and naturally low numbers. Also, many river dolphins possess very poor eyesight; some are considered blind, which can lead to unfortunate encounters with humans or human-made objects boats or fishing nets. This prospect is very disturbing to many scientists not only due to the fact of these creatures are facing extinction, but the uneasy reality that given the steady decline of these creatures, putting a stop to it before they are extinct is extremely difficult.

Without the proper funds, Government influence and support, regulations and prohibitions, need to be enforced by local Governments. Furthermore and probably the worst part of the ordeal is that once these specific rare type of river dolphins cease to exist, scientists dictate that there will never be any other species of dolphins in that category for the remainder of planet earths existence. They are simply incredibly rare and a miracle of nature. Most normal dolphins would reject such habitats, as they are built for the vast strides of the open Ocean. So unless something can be done these creatures known as the river dolphins will fade quietly into history.

The habitats of each dolphin varies, including type, size, shape, weight, length, temperature of water and food source, although most of these traits and characteristics share common similarities each can determine different ecosystems and niches that ultimately determines where the dolphin will live in.

for example, The bottlenose dolphin prefers to live in warmer waters, while most other dolphins prefer the cooler waters away from the equator. Another example, Dolphins that love to feed on planktons are often attracted to the coastal areas. Whereas other dolphins that will feed on lesser organisms will tend to spread farther out within the ocean range to acquire these sources. Shape, size weight also play a role in location of habitats, the smaller the dolphin the more inclined it is to stay near shallow waters or near a larger protective dolphin group.

As to avoid larger predators or any potential threats, whereas the larger dolphins are not afraid to venture out into the abyss as they are well equip to take on most any challenge they may come across due to their increased speed, flexibility, agility, maneuverability, strength and intelligence. Overall though dolphins will not take that approach, they will stay where their primary food source is and continue to capitulate and coexist there until its resources are depleted or another better area is found to replace it.

In conclusion, to answer the question of where dolphin swim and live, the answer is actually remarkable simple they live everywhere there is water, in oceans and rivers both north and south east and west, Atlantic Pacific, Indian and Mediterranean. Dolphins exist in many forms and live in almost all areas of the world’s oceans. The complexity of the dolphin is still one that astounds scientists to this day and their environment and habitats are usually well furnished with resources regarding food and mates, and because the dolphin technically does not have any natural predator their species will continue to thrive for generations.

This is of course with exception to the river dolphin that has the opposite future prospect as most normal dolphins, but regardless of that scientists will continue to explore the world of dolphins and continue to learn more about these fascinating creatures.

Create your own review
Swimming With Dolphins (800) 667-5524
Average rating:   2 reviews
Gwendolyn
by Gwendolyn