Types of Dolphins and Where They Live

Types of Dolphins and Where They Live

Human beings seem to be fascinated with dolphins. What is it about these aquatic creatures that makes them so alluring?

Well, to start, there is a bit of a mystery surrounding them. In fact, it’s like they swim in mystery instead of water. They are intelligent, they are playful, and they seem to be as curious about us
as we are them. We even fantasize about swimming with the dolphins and many people do get to do that in many of the facilities that Dolphin World offers.

Dolphins can often be seen keeping company with boats. They have saved many a surfer and person lost at sea from shark attacks. And it is also common for dolphins to be used in animal-assisted therapy.

And here’s something you may not know about dolphins… they used to live on land! That’s right, some 50 million years ago they started as a small-hoofed animal, kind of like a wolf, and then began living closer and closer to the water until they started living IN the water.

Eventually they became a big water creature with big, scary teeth but a not-so-big brain. But then about 35 million years ago, they went through another physical change and became smaller while their brains became larger. They developed high-frequency hearing and pretty much became the dolphins we know and love today!

Now that you know a little bit about dolphins in general, let’s take a look at some specific species. Did you know there were 32 types of salt water dolphins and 5 types of freshwater dolphins? That’s a lot of dolphins! We are going to take a deeper dive into five types of dolphins that will make you flip out. 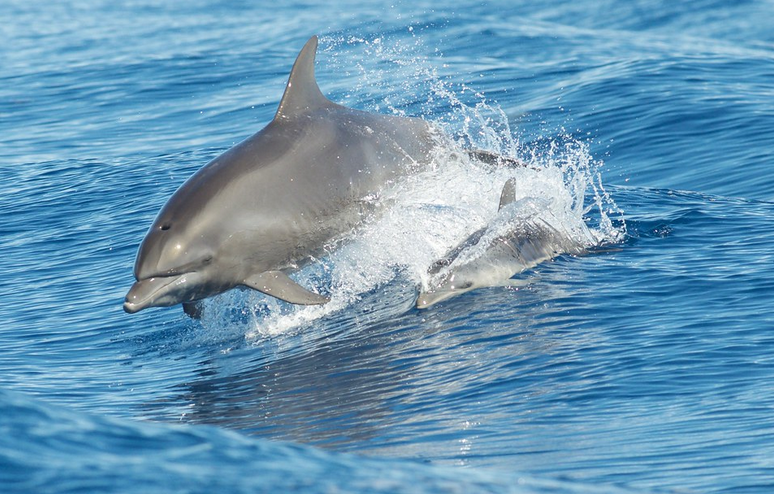 We thought we’d start with the dolphin you are probably most familiar with. These are the dolphins you see at aquatic facilities and in TV and films. Flipper (if you’re old enough to remember) was a bottlenose dolphin.

Bottlenose dolphins live in tropical and temperate oceans all over the world. They look like they are always smiling thanks to their curved mouth. Bottlenose are very social and live, travel and hunt in groups of 10-15 called “pods.”Bottlenose dolphins are excellent swimmers and can reach speeds of 30 miles an hour. And if you’ve seen them in action, you know they are also excellent acrobat artists that can launch themselves out of the water and flip and swirl through the air.

Perhaps what makes bottlenose dolphins so interesting is their ability to communicate with one another through a series of squeaks and whistles. If you’ve ever had the chance to meet them in person, you will never forget it. If you haven’t gotten up close to these wonderful creatures, keep reading to find out how you can. 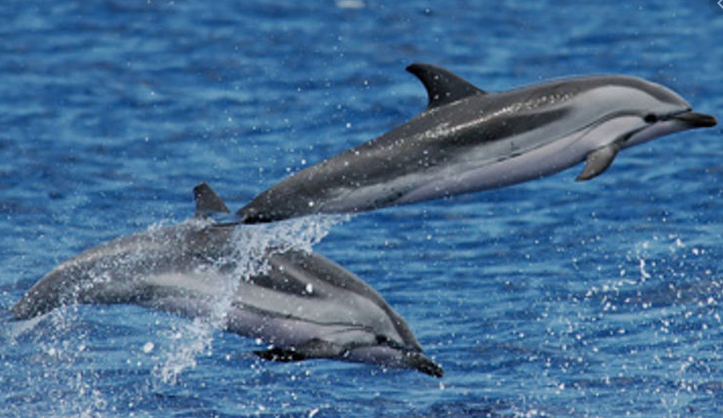 Striped dolphins are also known as the blue-white dolphins. They also call the world’s warm and tropical oceans home. Their pods are even larger than the bottlenose dolphins, usually made up of 25 – 100 or more dolphins. Some pods have been seen as large as thousands of dolphins.
The very interesting thing about the social structure of these particular dolphins is that it is quite complex. These dolphins organize themselves into groups according to age, sex, and breeding status.

Striped dolphins can weigh as much as 350 pounds and they also have a large dorsal fin and elongated beak. They eat all sorts of fish as well as squid, krill, crustaceans and octopus.Like bottlenose, striped dolphins communicate using a series of clicks and whistles. 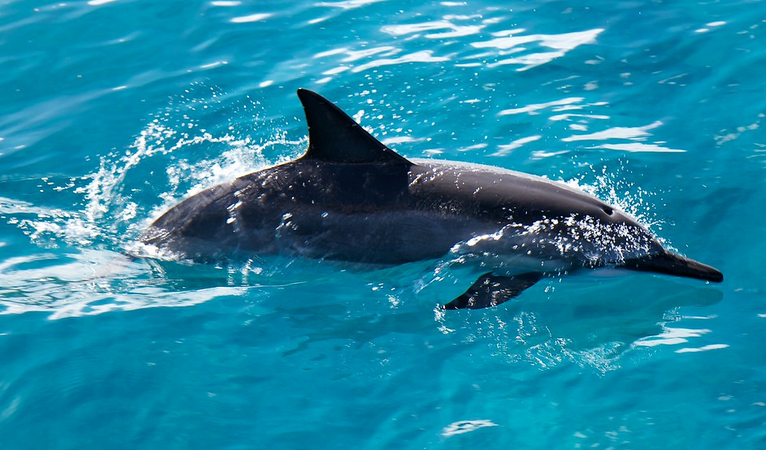 If you’ve ever had the pleasure of visiting the islands of Hawaii, you may have had the chance to glimpse a pod of spinner dolphins. They generally congregate around Maui.

Spinners are recognized as one of the most athletic sea mammals for their amazing aerial leaps. You’ve got to see them in action to believe what they are capable of.

These dolphins feed on mostly small fish as well as squid and shrimp. They tend to eat mainly at night and will dive as deep as 250 yards to eat their fill.

Here is something very interesting about spinner dolphins… while all dolphins breathe through blowholes, Hawaiian spinners have developed a method of breathing without having to get to the surface of the water. When they get near the surface of the water, they blow a bubble and
then quickly draw a breath from the bubble. That’s like dolphin scuba diving!

Spinner dolphins can live to be as old as 30 years in the wild. 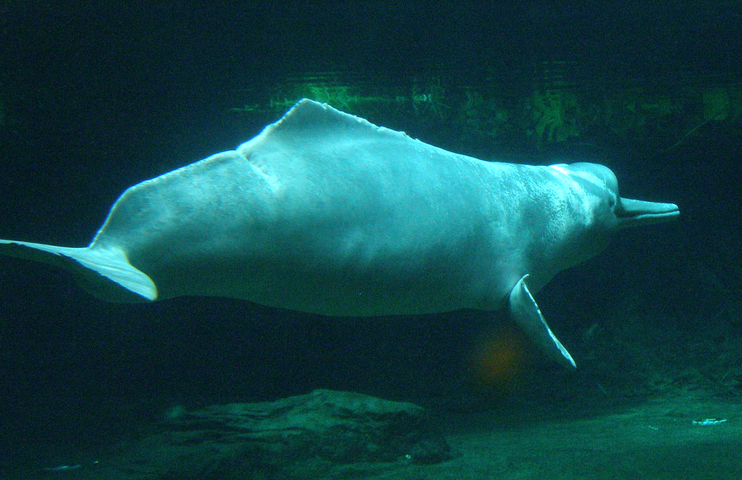 Now let’s talk about some freshwater dolphins. We’ll start with on of the most interesting-looking animals on the planet.The Amazon River dolphin is pink with a very long beak. Unlike most animals that start out pink as a baby and then turn a shade of brown or gray, these dolphins start out their life gray and eventually turn various shades of pink. The coolest thing is that when these dolphins get excited, they can flush bright pink, just like how we humans blush Of all the freshwater dolphins, these have the largest bodies and brains. The Amazon River dolphin can even weight as much as 400 pounds and can live as old as 30 years. But let’s back up to those very big brains… these dolphins’ brains actually have 40% more brain capacity than humans.

Now up until this point we have talked about how many species of dolphin live, hunt and travel in these super pods of hundreds or even thousands of dolphins. But these pink dolphins are much more solitary and generally live alone or in small groups of 2-4.

Something else that makes these dolphins stand apart from others, they have unfusedvertebrae in their neck, which means they can turn their head 180 degrees. This really helps them maneuver around tree trunks, rocks, and other obstacles often found in murky rivers. As far as appetite, they have a large one and prefer to eat fish, particularly catfish, crabs and even small turtles. 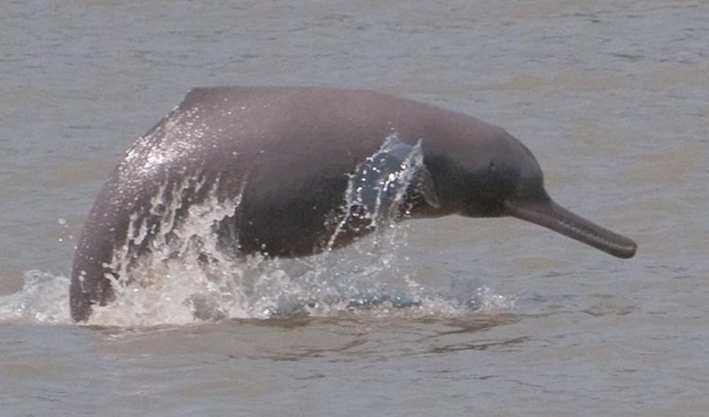 Last up on our list is another freshwater dolphin that lives in the Indus River in Pakistan. This dolphin goes by a couple of other names. They are sometimes referred to as the “sid swimming dolphin” because, you guessed it, they are often spotted swimming on their side.

They are also called the “blind dolphin” because of their poor eyesight.

These dolphins are slightly smaller than some of the others on this list and generally weight about 200 pounds. It’s actually the females that tend to grow slightly larger than the males.Indus dolphins’ diet consists mainly of fish, clams and shrimp. Since their eyesight is so bad,these dolphins rely on echolocation to find food.

Like their cousin the Amazon River dolphin, the Indus dolphins tend to travel in pairs but have been spotted in small groups of 10 or so. They communicate with one another using a series of clicks and whistles. These dolphins tend to be gentle swimmers and don’t perform acrobatics,
most likely because of their poor eyesight.

Something else that sets these dolphins apart from others on this list is that they do tend to form loose bonds with other dolphin species, but definitely have a preference for smaller pods.

It’s one thing learning about dolphins by reading about them. But it’s another thing entirely to getup-close-and-personal to them.
If that’s something that sounds fun to you, then consider spending your next vacation at Dolphin World. We’ve got locations in Florida, Hawaii, Mexico and throughout the Caribbean. Our programs cater to swimmers and non-swimmers, and young and old alike.

Book your next vacation with us and meet some fun-loving bottlenose dolphins. You are sure to make memories that last a lifetime.