Grand Cayman is not only the largest of the Cayman Islands, but also the one most frequented by tourists. The island is one-part laid back Caribbean paradise and one-part chic global hot spot where the wealthy go to be seen.

But if you’re visiting Grand Cayman and looking for an activity that is completely unique and unforgettable, then head directly to Cayman Turtle Center, a world-renown wildlife facility that offers education and interactive programs you and your family are sure to enjoy.

A Day at Cayman Turtle Center

You may be wondering why an island known for glitz, glamour, and fabulous parties would have a world-renowned wildlife facility that focuses on turtles. Well, the people of the Cayman Islands have a long history tied to the turtle.

Back in the 1600 and 1700s, the area was known for its abundant supply of green turtles. Permanent settlements were developed on the islands and turtling became a means of income as well as providing a local source of food.

Unfortunately, all this turtling depleted the waters of these wondrous creatures and the trade stopped in the early 1900s. The Cayman Turtle Center was established in 1968 by investors from the United States and Great Britain as a facility to raise the green sea turtle for commercial
purposes. The idea was that turtles could be supplied into the market without further depleting what remained of the wild population.

Years later, the facility is used as an educational center showcasing Caymanian wildlife and heritage while hosting an internationally renowned research and conservation center for sea turtles.

Visitors to the farm can enjoy visiting the breeding pond and turtle touch tanks, as well as Smiley’s saltwater lagoon that a 300-pound saltwater crocodile calls home. As if that weren’t thrilling enough, visitors can also explore predator reef, where visitors can come nose-to-nose
(okay, with a pane of glass in between) with nurse sharks, tarpon, barracuda, and even a hawksbill turtle.

But you can also enjoy things that live out of water and travel around in the air. The free flight aviary houses some of the most exquisitely-colored birds like peacocks, parrots and Scarlet Ibis.

There is also a butterfly garden where you can watch 18 species of butterflies fluttering by!

If, by the end of your visit, you haven’t gotten your fill of animal interaction, then we would greatly encourage you to cross the street to the dolphin facility where you can swim with the dolphins Grand Cayman and  interact with some more incredibly special creatures from the sea.

What Kind of Turtles Are in the Park? 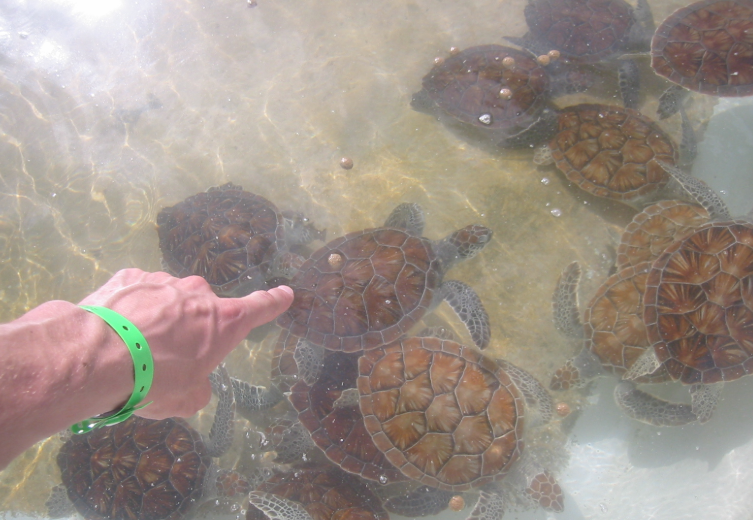 You will get to see and interact with two of the coolest, and oldest, turtles on the planet. 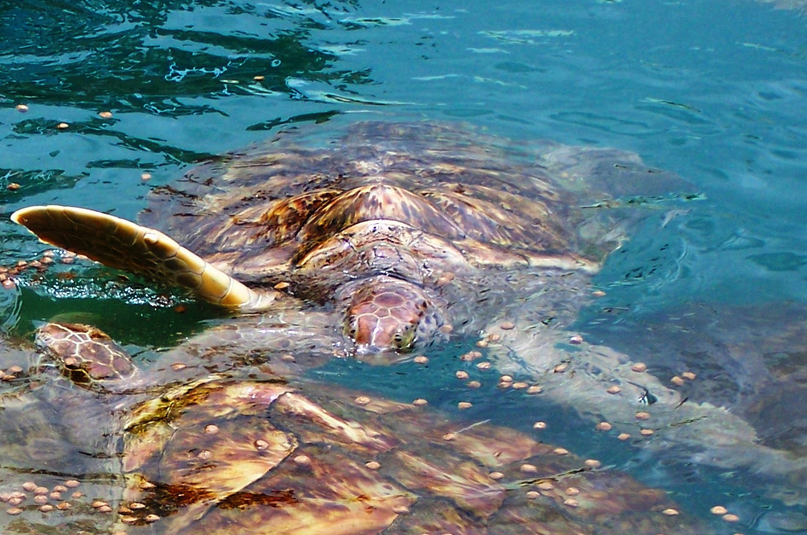 Green turtles are incredibly beautiful creatures whose shell varies from pale to very dark green and plain to very brilliant yellow, brown and green tones with radiating stripes. They are a medium-sized turtle (as opposed to say, the leatherback sea turtle) that eats mostly grass and algae. In the wild, green turtles stay near the coastline around islands or live in bays and protected shores. 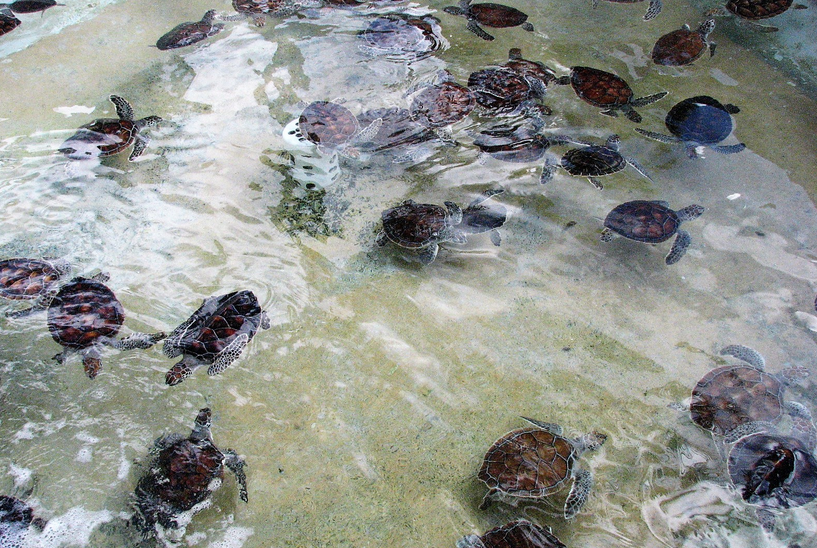 Loggerheads are the largest of all hard-shelled turtles, with massive heads and strong jaws, perfect for munching on conch, fish and crabs. Although they will travel hundreds of miles out to sea, they prefer coastal waters and frequent inland bodies of water.

How to Get to the Farm

It’s incredibly easy to get around the island but we think there are two best ways to do so: taxi and jitney bus. These options are great because you can sit back and let someone else do the driving! 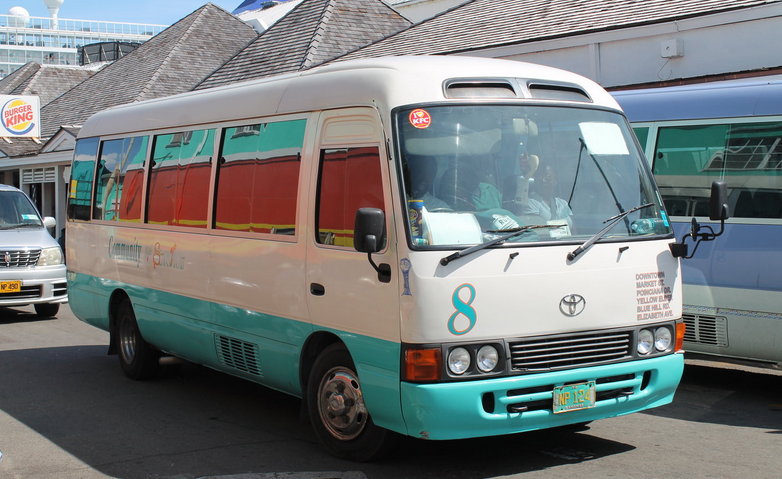 Fairs will vary based on time of day, weather, and how many people are in your party. If you are not sure of your fair, ask questions before you get into the taxi so you’ll know exactly how much you’ll be expected to pay at the end of your ride. You can also call a taxi company and ask:

Our favorite way to get around the island is by the mini jitney bus. First, they are just fun because you get to meet locals and other tourists. They also happen to be really cheap, so you’ll save a lot of money that you can later spend on seafood dinners and tacky souvenirs.

These buses serve all districts of Grand Cayman and the specific bus routes can be identified by numbers in colored circles on the front and side of the bus.

Another cool thing is although you can hop on a bus at the regular bus stops, you can also flag one down at any point along the route. So it’s kind of like a bus and a taxi in one, but again, more affordable.

If you’ve been thinking about where you should spend your next vacation, definitely consider Grand Cayman Island, where you can interact with some of the coolest creatures on the planet. Talk about memories that will last a lifetime!