Dolphins vs Porpoises – What are their differences?

Dolphins vs Porpoises – What are their differences?

You may ask, dolphin vs porpoises, what are their differences? Their are vast similarities and differences between dolphins and porpoises are astounding, to the naked and untrained eye, most common people would be unable to distinguish one from the other; this is generally because they are related. However there are three main differences between dolphins and porpoises, that is, porpoises are divided in to six species and sub species, while dolphins are divided into 40 different main types, the average dolphin is generally longer than the average porpoise, and the most obvious visible difference between the two groups is that porpoises have flattened, spade-shaped teeth. Another difference is that there are more fused neck vertebrae in porpoises than in dolphins, which limits the range of mobility in the porpoise neck. 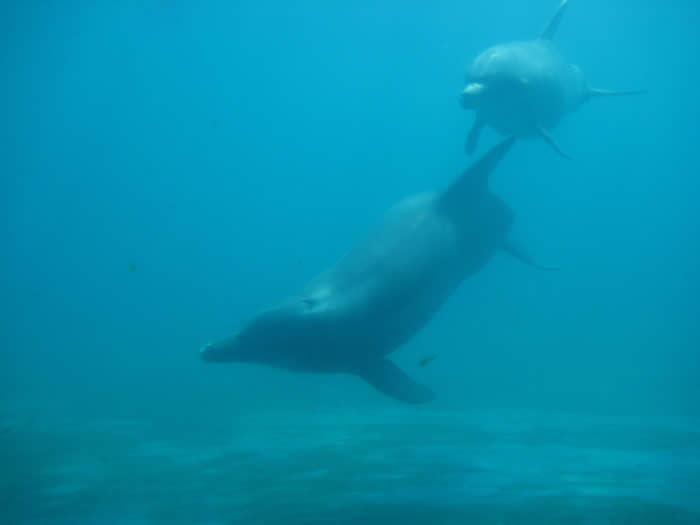 Dolphins are renowned for their uncanny ability to impress and wow the minds of countless many, their great thinking skills, and intelligent behavior are hypnotic to the common folk, who have never beheld them, and even more interesting is the great varying types of dolphins there are, almost 40 astounding variations of this majestic creature, ranging from the Hectors dolphin, and the short finned pilot, to the spinner dolphin and the white beak dolphins. Most dolphins inhabit salt water and there are only 5 species of dolphins that are known to naturally inhabit freshwater, the Amazon River dolphin, the Chinese River dolphin, the Ganges River dolphin, the Franciscan dolphin and the Indus River dolphin. As you have probably noticed, the name of the species of these dolphins is related to the waterway that represents their habitat. On the other hand Six types of porpoises currently reside in the world’s oceans all belonging to the family Phocoenidae. They include, Burmeister’s Porpoise, Dall’s Porpoise, the Finless Porpoise, the Harbour Porpoise, the Spectacled Porpoise and the rare Vaquita.

The name Dolphin comes from the Greek word, delphus, which can therefore be interpreted as meaning “a ‘fish’ with a womb”. Dolphins are among the most intelligent animals, and their often friendly appearance and seemingly playful attitude have made them popular in human culture. Play is an important part of dolphin culture. Dolphins play with seaweed and play-fight with other dolphins. At times they harass other local creatures, like seabirds and turtles. Dolphins enjoy riding waves and frequently surf coastal swells and the bow waves of boats, at times “leaping” between the dual bow waves of a moving catamaran. Occasionally, they playfully interact with swimmers. Captive dolphins have been observed in aquariums engaging in complex play behavior which involves the creation and manipulation of bubble rings.

Another difference between these two similar creatures is their lengths. Dolphins have an extremely wide range of lengths and widths, anywhere from 1.2 meters (4 ft) and 40 kilograms 88 pounds up to 9.5 meters (30 ft) and ten tons, referring to the killer whale. While the stubbly porpoise’s average length is just over 5 ft (1.5m) while females are slightly larger with average lengths of 5.5 ft (1.7m). The average adult harbor porpoise weighs between 135 and 170 lbs (61-77 kg). Now the important fact to take from all of this is that the porpoise does not generally exceed or minimize below these figures, while the dolphins can in rare cases exceed these numbers, in essence they are a lot more unpredictable in their sizes than the porpoise.

Since Porpoises are the smallest cetaceans and because of their small size, porpoises lose body heat to the water more rapidly than other cetaceans. Their stout shape, which minimizes surface area, may be an adaptation to reduce heat loss. Thick blubber also insulates them from the cold. The small size of porpoises requires them to eat frequently, rather than depending on fat reserves. Porpoises are fast swimmers—Dall’s porpoise is said to be one of the fastest cetaceans, with a speed of 55 km/h (34 mph). Porpoises tend to be less acrobatic and more wary than dolphins. Porpoises are rarely held in captivity in zoos or oceanaria, as they are generally not as capable of adapting to tank life or swimming with the dolphins programs as easily trained as dolphins.

Finally the most visible and easily spotted difference between these two mammals, their physical make up, the dolphins posses conical teeth and shorter beaks, while the porpoises generally tend to have flattened, spade shape teeth. The name porpoise in actuality was named from medieval times, porcopiscus (porcus pig + piscus fish). As per the name they gave them the name pigfish due to their somewhat noticeable characteristics.

All in all these animals may have some key differences, such as their size, varying types and aesthetic differences, but regardless of this they share the common ability to amaze and enthrall countless millions who are dazzled by their amazing intellect and unique characteristics, they are truly creatures blessed by the divine touch.

We have always thought of Dolphins as "family friendly". During the Covid pandemic we've been spending lunch time at the river. We often see Dolphins frolicking in groups. We wondered which species we were seeing. We give three stars because it would have been special to see pictures of both next to each other. Thanks for the help.

Hi. I don't really want to rate anything. I've just been, so far unsuccessfully, trying to find out about a major behavioral difference between the two groups (as claimed by a researcher/tour guide a few years ago in Hawaii); namely that if it porpoises, it's a dolphin, because porpoises don't. --Which of course leads to the question of: Wha? Which came first, the noun or the verb, and how?/why?/wha? So far, no website I've run across (in the last 2 minutes) discussing the differences has cited any behavior. (Including yours, apparently. No offense.) Any ideas? Thanks.