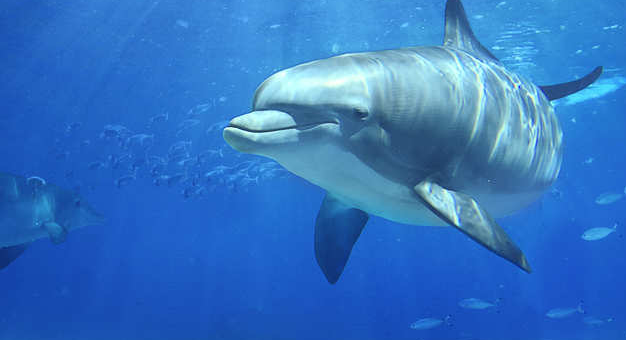 The sounds of the dolphin, for generations’ scientists and even common folk alike have tried to put meaning to these clicks and squeals. Is it a language, a higher intellect of which we cannot grasp? Is it signals, advanced forms of communications, or is it just mindless jibber jabber from a very overly happy animal? These are the questions we will answer and analyze as we journey through, the sounds of dolphins.

What do the Dolphin Sounds Mean?

So the questions are pretty straight forward, what are the kinds of sounds dolphins make and what do they mean if anything at all? To answer this we must take a look at research and evidence dealing with experimentation and trials involving sound and dolphins. Scientists have discovered through observation and meticulous testing that each and every dolphin has a different sound just like you and me. A sound that other dolphins recognize as a particular individual. Even a new baby dolphin, (calf), can detect it’s mother’s whistle within the pod soon after birth. Utilizing their blowholes, air sacks and valves, dolphins can emit a very wide variety of sounds. In fact, the frequency levels range 10 times beyond what humans can hear! This system is called “Echolocation”, or “Sonar”, just like what a submarine uses to navigate while underwater. Yet the dolphin’s sonar is much more advanced than human technology and can pin point exact information about it’s surroundings ranging from size, distance and even the nature of the object. Dolphin Speech is so complex that the sounds even cross the species barriers and enable different kinds of dolphins to communicate. They have been known to instruct each other as well as receive instructions and act accordingly. 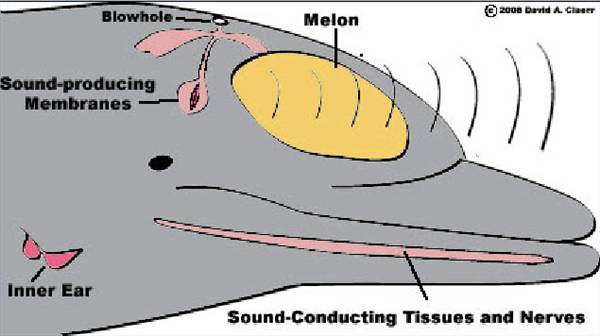 The extent of which these sound waves can be utilized by the dolphins is simply mind blowing, and for so many different uses, from searching for prey underneath the sea floor, to scanning its surroundings for danger, to sensing potential predators, to even stunning and inflicting instant paralysis to smaller fish as to make their capture easier. The many uses of sounds by dolphins is still fascinating marine biologists to this day, but here is where it gets really interesting. There are so many different sounds that can be emitted by the dolphin at so many different frequencies that scientists are certain that there has to be quite literally, a dolphin language, common sounds and signals that are repeatedly heard to form a coherent dialect of clicks and whistles so that other dolphins can understand. This is mind blowing because as of right now there are only a handful of creatures on the planet with the capacity and intellect to form a complete language with their own species, and this proves and certifies without a doubt the dolphins limitless potential, intellect and ability. 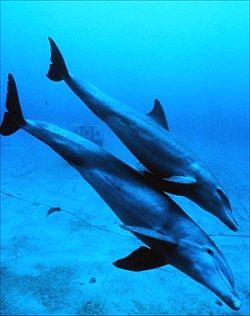 So really we have come to the core of our journey dolphin sounds are primarily due to echolocation. What is echolocation? With God’s help, toothed whales developed echolocation, a sensory faculty that enabled them to survive in often murky and dark aquatic environments. It is a process in which an organism probes its environment by emitting sounds and listening to echoes as the sounds bounce off objects in the environment. With sound traveling better in water than electromagnetic, thermal, chemical, or light signals, it was advantageous for dolphins to evolve echolocation, a capability in which acoustic energy is used, in a sense, to see underwater.

The process of echolocation begins when dolphins emit very short sonar pulses called clicks, which are typically less than 50-70 millionth of a second long. The clicks are emitted from the melon of the dolphin in a narrow beam. A special fat in the melon called lipid helps to focus the clicks into a beam. The echoes that are reflected off the object are then received by the lower jaws. They enter through certain parts of the lower jaw and are directed to ear bones by lipid fat channels. The characteristics of the echoes are then transmitted direct to the brain. The short echolocation clicks used by dolphins can encode a considerable amount of information on an sonified object – much more information than is possible from signals of longer duration that are emitted by manned sonar. Underwater sounds can penetrate objects, producing echoes from the portion of the object as well as from other surfaces within the object. This provide swimming dolphins in the ocean with a way to gain more information than if only a simple reflection occurred at the front of the object.

In conclusion we can say with certain accuracy that the dolphins do have an organized language, and that the sounds that they utilize on a day to day basis are no different than the sentences that we utter to our friends, family and loved ones each day. It is a collective community bonded and strengthened through the fabric of communication is coherence and congruence. These creatures are extremely advanced for their time, and their knowledge and ability are impressive. In fact one could infer that if humans were ever to be wiped out, to be extinct, the dolphin would be one of the main runners to take over from where civilization left off. They show all the same feelings and emotions that humans do, and their ability to comprehend and interpret information is astounding, but most importantly and to keep with the theme of this article. Their greatest single asset would be their sound, for it is communication and teamwork that are the building stones of great new beginnings and possibilities to come.