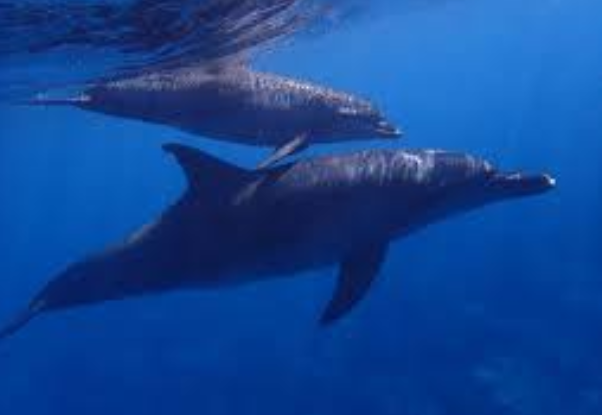 Dolphins have been fascinating human beings for ages. Dolphins are highly-intelligent and charismatic animals that are known to come to the rescue of people stranded in the water.

Besides having incredible personalities, dolphins are also excellent swimmers and can reach speeds of over 18 miles an hour!

Besides having incredible personalities, dolphins are also excellent swimmers and can reach speeds of over 18 miles an hour!

Like people, dolphins are incredibly social creatures that live and travel in social groups called pods. While normal pods typically consist of a dozen or so dolphins, “super pods” can consist of 1,000 or more
dolphins.

Dolphins also speak to one another over long distances using a complex system of squeaks and whistles. A dolphin hundreds of miles away can signal to other dolphins that it needs help.

You might have also heard dolphins making a peculiar clicking noise. This is called echolocation and it is how dolphins “see.” They make up to 1,000 clicking noises per second. These clicks bounce off of objects, then bounce back to the dolphin, which can then get an idea of the location, size and shape of the object. It is through echolocation that dolphins catch their prey.

Dolphin Diet in the Wild

Dolphins are carnivores and eat other animals. In the wild their diet consists of a variety of fish, squid, jellyfish, shrimp and octopus. These animals are so clever, they are often spotted trailing fishing boats with the hopes of scooping up the leftovers!

There are actually more than 40 species of dolphin that live in environments ranging from fresh water rivers, estuaries, coastal waters to deep sea open oceans. The types of fish they eat is dependent on where in the world they live and what time of year it is.

For instance, bottlenose dolphins that live in Scotland love salmon, which is available in the spring and summer months. In the winter, when salmon is scarce, they eat herring and mackerel.

Here’s a fun fact, while all dolphins have teeth, they do not chew their food! They just grab, bite and swallow.

The dolphin diet in captivity is a little different than in the wild. For starters, instead of live, fresh fish, dolphins are served frozen fish. But dolphin facilities still try and give their dolphins a variety of fish.

For instance, SeaWorld feeds their adult bottlenose dolphins a variety of fish including mackerel, smelt, capelin, and herring. Each dolphin receives 25 to 35 pounds of fish each and every day. Guess how much that costs? A lot! Just go to your local grocery store and price what 35 pounds of these fish would total (then multiply that by anywhere from five to 20 dolphins).

How Do Dolphins Get Their Water Intake?

While some dolphins live in fresh water rivers, the majority of wild dolphins live in the ocean, and ocean water is far too salty for them to drink. In fact, if dolphins drank this salt water, their body would have to use more water just to get rid of all that salt.

So how do dolphins get their water intake? It’s not like there are water fountains at the bottom of the ocean!

Well, dolphins primarily get their water intake through their food. The fish and squid they eat contain a good deal of water. Also, when dolphins metabolize, or burn their fat, water gets released in the process. And finally, their kidneys have also adapted to retaining as much water as possible.

Experience Dolphins for Yourself!

Have you always wanted to see dolphins in person? Now’s your chance. Dolphin World offers programs that allow you to see dolphins in the wild in Key West, Florida. We also have many facilities in the U.S. and the Caribbean where you can get up-close-and-personal with dolphins in captivity. Hug, kiss, swim with dolphins and even get a dorsal fin ride. There is nothing else on Earth quite like making friends with these amazing creatures.

If you’ve been wondering what to do on your next family vacation, take a look at our programs and book your dolphin vacation today.